Structural analogues of pyrimidine
Back to directory 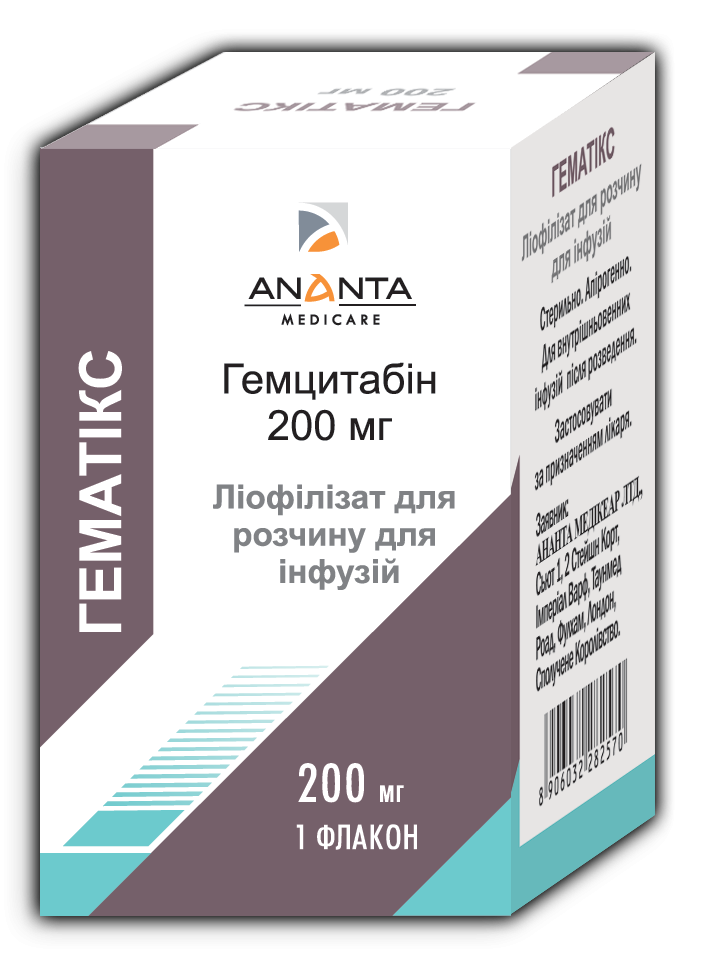 Show instructions for useClose
CONFIRMED
Order of the Ministry
of Healthcare of Ukraine
d/d 09.08.11  No 490
Registration Certificate
No UA/11415/02/01

for medical use of the preparation

Medical form. Lyophilizate for preparation of the solution for infusions.

Hypersensitivity to gemcitabine or other components of the preparation.

Way of administration and doses.

Gemcitabine may be indicated only by the doctor already having experience of anticancerchemotherapy administration.

The recommended dose of gemcitabine is 1,000 mg/m2 to be introduced via intravenous 30-minute infusion. This dose should be administrated on Days 1, 8 and 15 of every 28-day circle in combination with cisplatin. Cisplatin is introduced in the recommended dose 70 mg/m2 on Day 1 after gemcitabine or on Day 2 of every 28-day circle. Then this 4-week circle is repeated. Decrease in the dose with every circle or during any single circle is possible due to the patient’s toxicity degree.

Gemcitabine should be introduced via intravenous infusion in the dose of 1000 mg/m2during 30 minutes once a week for 7 weeks with further 1-week interval. The following circles should be infusions that are conducted once a week for 3 weeks with further interval every 4th week. Before initiation of every new circle or during any single circle conduction, dose adjustment is possible due to the patient’s toxicity degree.

The recommended dose of gemcitabine is 1,000 mg/m2 and is introduced via 30-minute intravenous infusion once a week for 3 weeks with further 1-week interval. This 4-week circle is repeated. Decrease in the dose with every circle or during any single circle is possible due to the patient’s toxicity degree.

The recommended dose of gemcitabine is 1,250 mg/m2 of body surface and is introduced via 30-minute intravenous infusion on Days 1 and 8 of the circle (21 days). Before initiation of every new circle or during any single circle conduction, dose adjustment is possible due to the patient’s toxicity degree. Cisplatin was administrated in the dose of 75–100 mg/m2 once every 3 weeks.

Gemcitabine in combination with paclitaxel is recommended for introduction in the following regimen: paclitaxel (175 mg/m) is introduced on Day 1 during 3-hour intravenous infusion, then gemcitabine (1,250 mg/m2) is introduced during 30-minute intravenous infusion on Days 1 and 8 of each 21-day circle. Before initiation of every new circle or during any single circle conduction, dose adjustment is possible due to the patient’s toxicity degree. Patient should have absolute granulocyte count, at least 1.500 (´ 10/L), before treatment initiation with combination of gemcitabine + paclitaxel.

Gemcitabine in combination with carboplatin is recommended for introduction in the dose of 1,000 mg/m via 30-minute intravenous infusion on Days 1 and 8 of each 21-day circle. On Day 1 of the circle after gemcitabine, carboplatin is introduced in the dose necessary to provide AUC equal to 4 mg/ml/min. Before initiation of every new circle or during any single circle conduction, dose adjustment is possible due to the patient’s toxicity degree.

Monitoring of toxicity phenomena and dose adjustment of the preparation

Dose adjustment due to phenomena of non-hematologic toxicity

In order to control non-hematologic toxicity, it is necessary to conduct regular patient examination and estimate their hepatic and renal functions. The dose of gemcitabine may be decreased (for all courses or within any one course) due to intensity of toxicity phenomena. Generally, in case of development of severe (degree 3 or 4) phenomena of non-hematologic toxicity, excluding nausea/vomiting, gemcitabine therapy is discontinued or the dose of the preparation is decreased due to doctors’ indications. Treatment with gemcitabine can be continued only after toxicity effects resolve.

Dose adjustment due to phenomena of hematologic toxicity

At the beginning of the treatment course

Irrespectively to indications, before every introduction of the preparation it is necessary to estimate the count of platelets and granulocytes in blood. The treatment can be initiated if granulocyte count is ≥1,500 (x 106/l), and platelet count is ≥ 100,000 (x 106/l).

During the treatment course

Gemcitabine dose adjustment is carried out according to the recommendations given below.

Gemcitabine dose adjustment during the course of treatment in patients with urinary bladder cancer, non-small cell lung cancer or pancreas cancer in monotherapy or combined therapy with cisplatin.

* Continued introduction of gemcitabine within the course is possible only after achievement of absolute granulocyte count ≥500 (x106/L) and platelet count ≥50 000 (x106/L).

Change of the dose due to development of hematologic toxicity in the following cycles, for all indications

Gemcitabine dose should be decreased by 75% as for initial dose of the cycle in case of development of the following manifestations of hematologic toxicity:

• cycle postponement for more than 1 week due to toxicity development.

Rules of preparation of the solution for infusion.

1. During dissolution and further dilution gemcitabine for intravenous introduction via infusion, aseptic method is used.

Unused preparation or material waste should be utilized according to local requirements.

From the side of urinary tracts: proteinuria, hematuria, renal insufficiency; in single cases – symptoms similar to hemolytic uremic syndrome. Renal disorders may be irreversible even after treatment determination (hemodialysis may be necessary). Treatment with gemcitabine should be discontinued in case of development of first signs of microangiopathic hemolytic anemia, such as abrupt decrease of hemoglobin level with concomitant thrombocytopenia and increased serum levels of bilirubin, creatinine, urea and/or lactate dehydrogenase.

From the side of respiratory system: dyspnea, cough; seldom – bronchospasm, interstitial pneumonia, pulmonary edema, respiratory distress syndrome. In case of development of these symptoms, the treatment with gemcitabine should be discontinued.

From the side of nervous system: sleep disorders, sleepiness.

From the side of the organism in general: fungi-like symptoms, such as fever, headache, chill, myalgia, asthenia; cough, rhinitis, malaise, and hyperhidrosis are possible; radiation toxicity (in case of concomitant radiotherapy).

The frequency of hematological toxicity of degree 3 and 4 (neutropenia, thrombocytopenia, leukopenia, anemia) increases, when gemcitabine is used in combination with paclitaxel. However, increased frequency of undesirable phenomena is not associated with increased frequency of infections or hemorrhagic complications. Fatigue and fibril neutropenia are observed more often, if gemcitabine is used in combination with paclitaxel. Fatigue, which is not connected with anemia, usually dissolves after the first cycle of the therapy.

Overdose is manifested by increased toxic action. Clinically acceptable toxicity has been observed in case of gemcitabine introduction as single intravenous doses up to 5.7 g/m2for 30 minutes every 2 weeks. As soon as overdosing is suspected, the patient should be provided constant medical supervision, including blood count control. If necessary, symptomatic therapy is indicated. There is no specific antidote.

Use during pregnancy and lactation.

The use of the preparation is contraindicated during pregnancy and lactation period.

The preparation is not used in pediatric practice due to the lack of clinical experience.

Preventive measures while working with the preparation Gematix.

During preparation and utilization of the solution for infusions, it is necessary to follow standard safety measures for cytostatic preparations. Any actions with the solution for infusions should be carried out in the protected container, wearing protective clothes and gloves. If there is no protected container, safety means should be supplemented with a mask and protective eye glasses.

Peculiarities of the use.

Gemcitabine use in patients with hepatic metastases as well as with history of hepatitis, alcohol dependence or liver cirrhosis may cause worsening of present liver insufficiency.

In case of treatment with gemcitabine, it is necessary to control periodically liver function (including conduction of virology analyses).

Gemcitabine should be indicated with caution in patients with disturbed hepatic function or with disturbed renal function due to insufficient data of clinical research as for exact dosing for these group of patients.

Due to the risk of development of cardiac and vascular disorders, the preparation should be indicated with caution in patients with history of cardiovascular diseases.

There have been reports on the development of side effects from the side of respiratory system, sometimes severe (pulmonary edema, interstitial pneumonia and respiratory distress syndrome in adults) during treatment with gemcitabine. Etiology of these effects has not been established yet. In case of development of these phenomena, it is necessary to consider the appropriateness of gemcitabine treatment discontinuation. Early initiation of supportive therapy provides the possibility to improve the state of the patient.

During treatment with gemcitabine, it is necessary to conduct periodical control of renal function.

In case of development of first signs of microangiopathic hemolytic anemia (abrupt decrease of hemoglobin level with concomitant thrombocytopenia and increased serum levels of bilirubin, creatinine, urea nitrogen or lactate dehydrogenase), the preparation should be discontinued. Renal insufficiency may be irreversible after gemcitabine withdrawal, and the patient may require hemodialysis.

This medicinal preparation contains sodium. It should be considered in patients, who follow controlled sodium diet.

Ability to influence the reaction rate when driving or operating other mechanisms.

During treatment it is recommended to avoid potentially dangerous types of activity that require increased attention as well as psychic and locomotive reaction rate.

Interaction with other medicinal preparations and other forms of interactions.

Concomitant radiotherapy (together or during first 7 days after gemcitabine introduction): toxicity, caused by the therapy with different methods, depends on various factors, including gemcitabine dose, infusion frequency, radiation dose, scheme of radiotherapy conduction, scheduled technique, zone and volume of radiation.

Research studies have shown that gemcitabine has radiosensitization activity. When gemcitabine was indicated in the dose of 1000 mg/m2 during the period up to 6 weeks together with therapeutic irradiation of the thoracic cage in patients with non-small cell lung cancer, there was observed a significant toxicity as severe and potentially life-threatening mucositis, esophagitis and pneumonitis, especially in patients treated with large-volume radiotherapy (volume of median treatment of 4795 cm3).

In case of non-small cell lung cancer, the appropriateness of gemcitabine administration in smaller doses in combination with radiotherapy with forecasted toxicity has been proved. Irradiation of the thoracic cage in the doses of 66 Gy was conducted in combination with gemcitabine (600 mg/m2, four times) and cisplatin (80 mg/m2, twice) for 6 weeks. The optimal regimen of safe gemcitabine use with therapeutic doses of irradiation for all tumor types has not been established yet.

Non-concomitant radiotherapy (> 7 days): data analysis has not revealed increased toxicity in case of gemcitabine administration over 7 days before or after irradiation. Data demonstrate that gemcitabine use may be initiated as soon as acute outcomes of irradiation resolve or at least in one week after radiotherapy.

There have been reports about tissue lesions after radiotherapy (for example, esophagitis, colitis and pneumonitis) in case of both concomitant and non-concomitant indication of gemcitabine.

Pharmacodynamics. Gemcitabine is antitumor preparation, which has cytotoxic action conditioned by inhibition of DNA synthesis. The preparation is metabolized in the cell to active biphosphate and triphosphate nucleosides. Biphosphate nucleosides, which have been formed, in the first place inhibit the action of ribonucleotide reductase. This enzyme catalyzes reactions, which lead to the formation of deoxynucleosidyl triphosphates for DNA synthesis, which leads to their decreased concentration in the cell. In the second place, triphosphate nucleosides, which have been obtained during metabolism of the preparation, compete actively for inclusion into DNA chain, as well as the may be also included into RNA. After introduction of intracellular metabolites of the preparation into DNA chain, one additional nucleotide is added to its growing chains, which leads to total inhibition of further DNA synthesis and programmed death of the cell.

Incompatibility. Do not mix or use concomitantly with other preparations in one and the same infusion system.

Not to be used after expiration date indicated on the package.

Store at temperature below 25 °С in the original package. Keep out of the reach of children. Do not freeze.

Package. 1 vial with the preparation in a carton.

Category of dispensing. On prescription.

This section is intended only for health specialists.

If you are not a specialist in the field of health (physician, pharmacist or health expert), you are not recommended to visit this section.

Confirming that you are an expert in the field of health, you agree to all the following conditions of this section:

By clicking OK, you confirm that you are a specialist in the field of health