Symptomatic Cold medicines
Back to directory 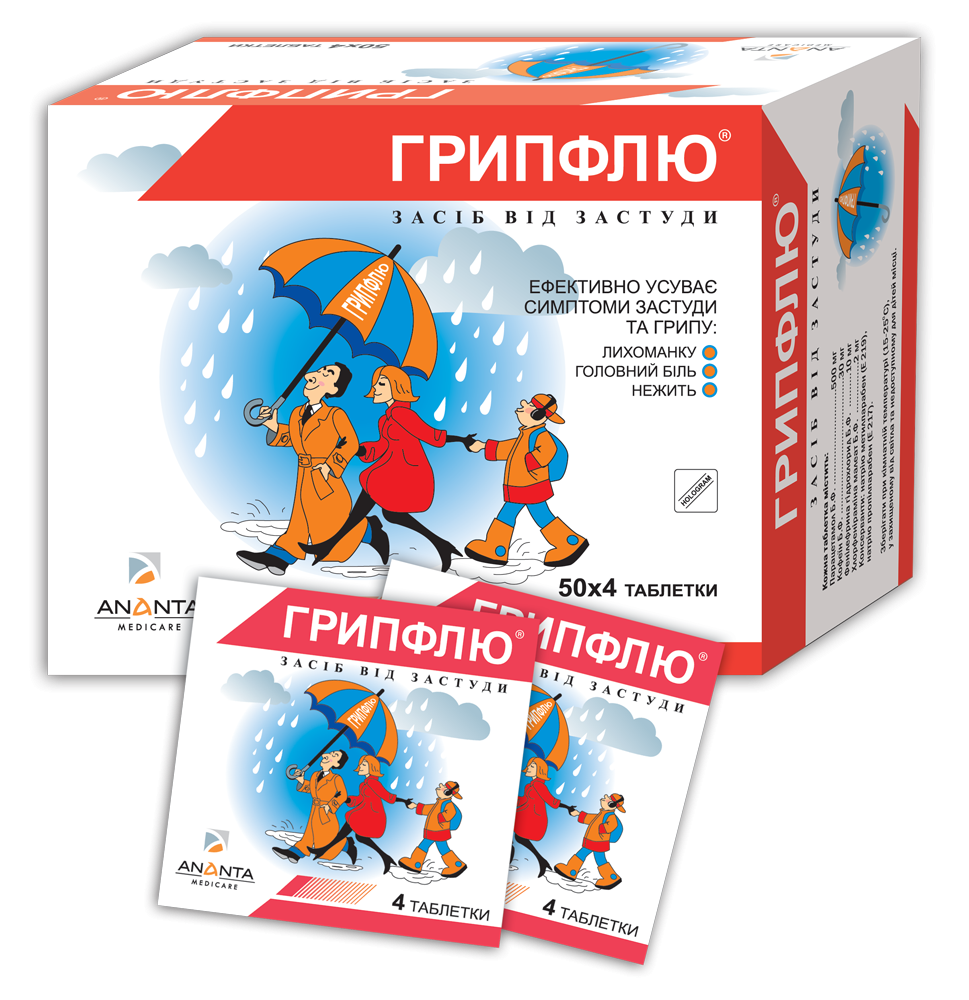 for medical use of the medicinal product

White or nearly white, round, flat tablets with scoring line and one beveled edge.

The medicinal agent’s pharmacological activity is attributable to the properties of its ingredients: paracetamol, caffeine, phenylephrine hydrochloride and chlorpheniramine maleate. Paracetamol has an antipyretic, analgesic and anti-inflammatory effect. The mechanism of action is associated with inhibition of prostaglandin synthesis.

Phenylephrine hydrochloride has a vasoconstrictor effect and reduces swelling of the nasal mucosa and paranasal sinuses.

Chlorpheniramine maleate has an antihistamine and anticholinergic effect. By blocking H1-receptors, it causes an anti-allergic effect, reduces vascular permeability of the upper respiratory tracts’ mucosa, and reduces tearing and itching in eyes and nose.

Interaction with other medicinal products and other forms of interaction.

The rate of absorption of paracetamol may be increased with the use of metoclopramide and domperidone, and decreased - with cholestyramine. The following interactions may be observed during concomitant use of paracetamol: elimination of antibiotics from the body may be slowed down; tetracycline increases the risk of anaemia and methemoglobinemia development caused by acetaminophen; food and antacids reduce absorption of acetaminophen. The long-term concomitant use increases the anticoagulant effect of coumarins (e.g. warfarin). Barbiturates reduce the antipyretic effect of paracetamol. Anticonvulsant medications (phenytoin, barbiturates, carbamazepine) stimulating microsomal liver enzymes and isoniazid may enhance hepatotoxicity of paracetamol. Paracetamol reduces the effectiveness of diuretics.

Do not use with alcohol.

Caffeine enhances the effect (improves bioavailability) of analgesics and antipyretics. It potentiates the effects of xanthine derivatives, α- and β-adrenergic agonists, and psycho-stimulant drugs.

Cimetidine, hormonal contraceptives and isoniazid enhance the effect of caffeine.

Caffeine reduces the effect of opioid analgesics, anxiolytics, hypnotics and sedatives. It is an antagonist for anesthesia agents and other agents that suppress the central nervous system. In addition, it is a competitive antagonist of adenosine and ATP. Concomitant use of ergotamine with caffeine improves absorption of ergotamine in the gastrointestinal tract. Concomitant use of thyroid-stimulating agents increases a thyroid effect. Caffeine reduces the concentration of lithium in blood.

Do not exceed the dose.

The concurrent use with other medicinal products intended for the symptomatic treatment of cold and flu and medicines containing paracetamol should be avoided.

This medicinal product is not recommended to use along with sedatives, hypnotics or drinks that contain alcohol.

The medicinal product is prescribed by a doctor only after assessing the risk-benefit ratio in the following cases: arterial hypertension; epilepsy; benign prostatic hyperplasia; cardiac arrhythmia; pheochromocytoma; urination disorders.

It is necessary to consult a doctor regarding the possibility of treatment in patients with liver disturbances and kidney dysfunctions.

It is necessary to monitor the functional state of the liver and peripheral blood picture if, on the recommendation of a doctor, the medicinal product is used for a long period.

Take into account the increased risk of hepatotoxic action of paracetamol in patients with alcoholic liver disease; the medicinal product can affect the results of laboratory tests on blood glucose and uric acid.

During use of the medicinal product it is advisable to avoid excessive consumption of coffee, strong tea, tonic beverages and other medicinal products containing caffeine. This may cause sleep disturbances, tremors, tension, irritability and palpation.

If the symptoms persist, it is recommended to consult a doctor.

It is recommended to consult a doctor if any of the symptoms persist.

Use during pregnancy and lactation.  Contraindicated.

Effects on the ability to drive and operate machinery.

During the treatment, driving vehicles, working with machinery and other dangerous activities should be avoided.

Routes of administration and dosage.

Adults and children over 12 years – 1 tablet, with the interval between doses no less than 4 hours, but no more than 4 tablets a day.

The duration of treatment is determined by a doctor. The maximum period of use without consulting a doctor is 3 days.

Children.  The medicinal product is used to treat children over 12 years of age.

Paracetamol overdose: liver damage is possible in adults who have taken 10 or more grams of paracetamol, and in children who have taken the medicinal agent at a dose of more than 150 mg/kg body weight. Intake of paracetamol at a dose of 5g or more may cause liver damage in patients with risk factors (long-term treatment with carbamazepine, phenobarbital, phenytoin, primidone, rifampicin, St.-John's wort or other medicinal products that induce liver enzymes; regular consumption of excessive amounts of ethanol, glutathione cachexia (digestive disorders, cystic fibrosis, HIV infection, starvation, and cachexia).

Treatment: the patient should be immediately hospitalized, even if there are no first symptoms of overdose. Symptoms may be limited to nausea and vomiting, or may not reflect the severity of overdose or the risk of organ damage. In case when an excessive dose of paracetamol was taken within 1 hour, the treatment with activated charcoal should be initiated. The concentration of paracetamol in blood plasma should be measured in 4 hours or later after taking the drug (earlier concentrations are not accurate). Treatment with N-acetylcysteine may be used within 24 hours since paracetamol intake. But the maximum protective effect occurs if used within 8 hours after paracetamol intake. After this time the effectiveness of antidote declines sharply. If necessary, N-acetylcysteine is intravenously introduced to the patient ​​in accordance with the approved list of doses. In the absence of vomiting methionine can be used orally as appropriate alternative in remote areas outside the hospital.

Treatment: In the first 6 hours after a suspected overdose it is necessary to carry out a gastric lavage followed by hospitalization of the patient; symptomatic therapy; use of α-, β-blockers in case of severe hypertension.

Respiratory, thoracic and mediastinal disorders: bronchospasm in patients sensitive to aspirin and other NSAIDs.

Store in the original package at a temperature not exceeding 25 °C. Keep out of reach of children.

4 tablets in a strip; 1 strip in an envelope; 50 envelopes in a cardboard box.

Without prescription – tablets No. 4.